The Essence of Existence: Hermitage, Starohoří 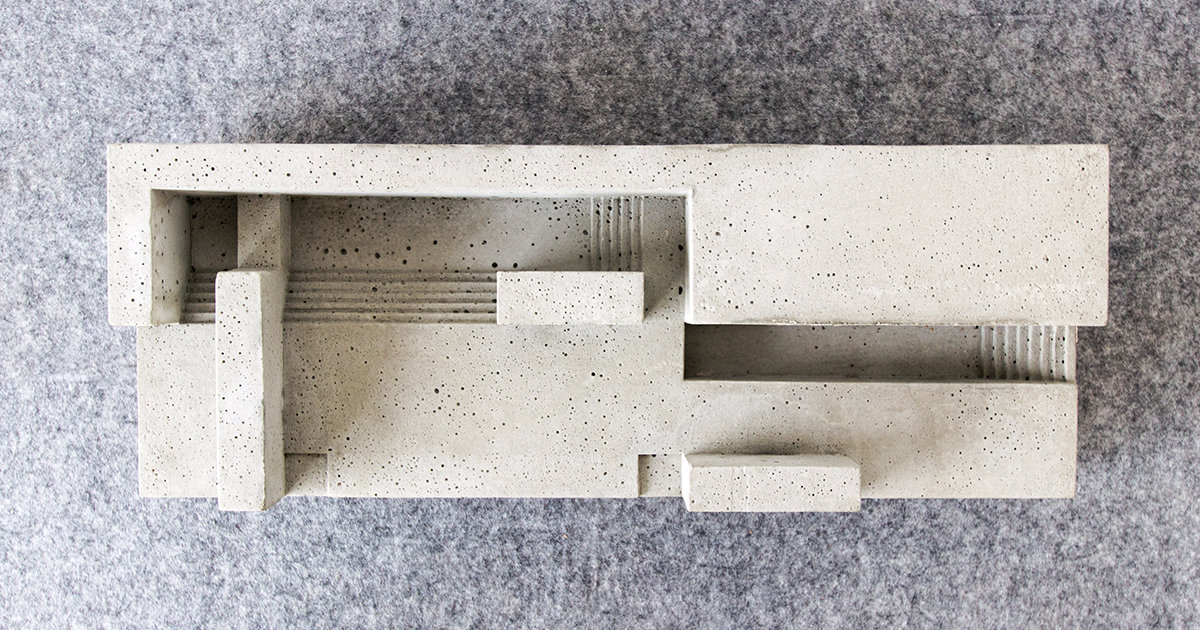 This project deals with the fundamentals of architecture. Its aim is to show architectonic space as an addition to nature by studying relations between place, function, and form.
Set on the mountain slope far from other buildings, the chosen site belongs to an old mining district in the northern part of the Czech Republic and is situated on the mountain path between a town and collapsed mines. It is a place full of history, where wild nature is building up the sense of solitude. This location has a direct impact on functions of the building. It became important to connect the surrounding landscape with a simple way of living.

The plan of the hermitage gives the opportunity to look for relations and tensions resulting from the size, location, and function of each platform.
To create a consistent vision of the place it was important to find a common language between each part of the building. It was possible by using Plastic Number, which mathematical equation is defined as x3=x+1 where x=1.3247...

The project required to think about the space by defining the relationship between what is under and above the ground, what is inside and outside. The quality of space that creates the hermitage is considered in a very fundamental way in terms of matter and emptiness. Behind all of this, there is a vision of the specific space where visitors could feel the weight of the building, feel its structure and experience it in their own way, leaving a bit to a mystery.

The project prepared by Dawid Rószczka, called The Essence of Existence: Hermitage, Starohoří, follows Hans van der Laan’s concept of beauty of architectural objects resulting from its proportions. It attempts to find the source of architectural form and definition of the phenomena of the open landscape, finding inspiration in the theories by Juhani Pallasma, Martin Heidegger or Bijoy Jain.
The author is intuitionally reaching for the idea of open landscape, in which topos dominates over architectural objects. Thus, going back to the origins of architecture, seen as a place where men had to struggle with the environment to survive. It takes us back to the primary conditioning of architecture, and times in which it fully respected existing landscape. The architecture which is actually invisible in the forest. Only inside you feel its hidden, minimalistic beauty. These are the assumptions with which the function of the presented building harmonizes perfectly – hermitage as a place to contemplate the sense of life, something as primal as the object itself.
The suggested vision results from clear ideological assumptions. The concept of form was reached through numerous sketches, form and shape analysis and spatial models. It is original work, with a high level of theoretical and artistic expression. It was presented in the minimalistic graphics convention, with the elements of study analysis and ideological schemes, together with large format architectural models. 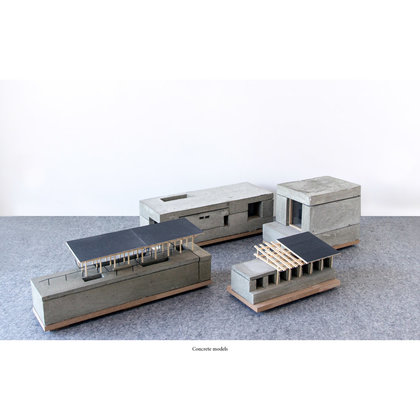 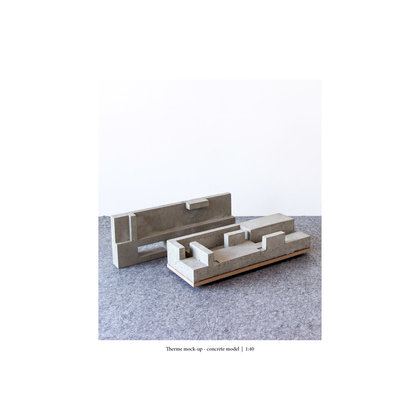 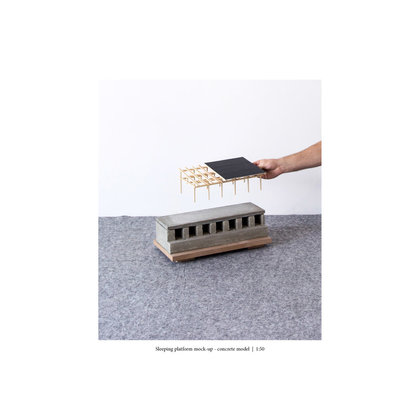 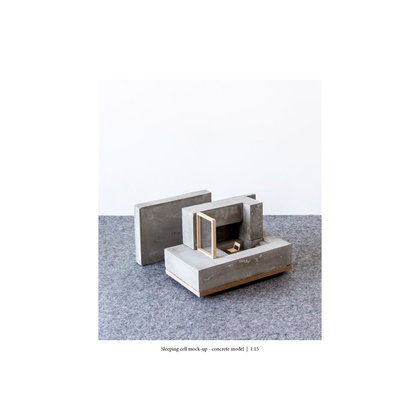 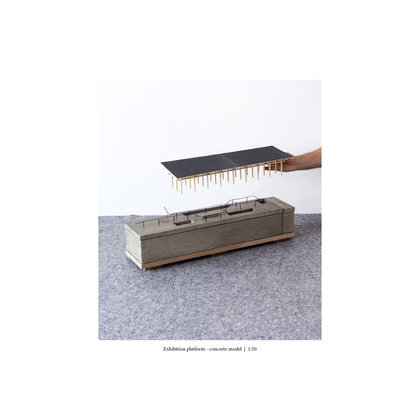 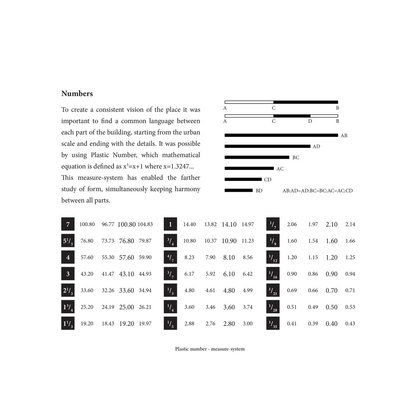 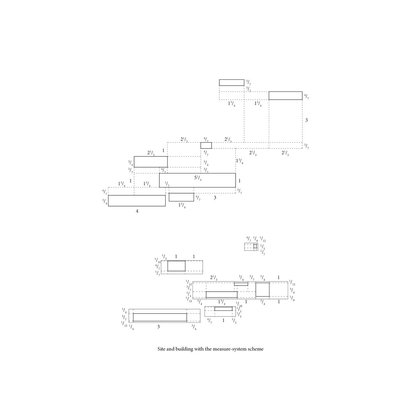 Site and building with the measure-system 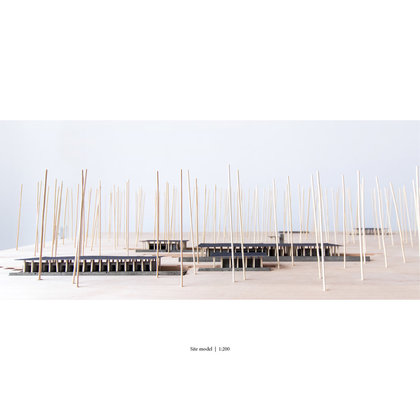 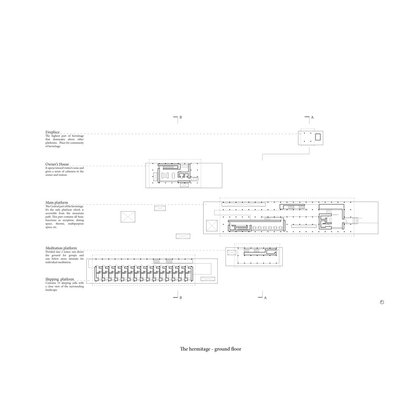 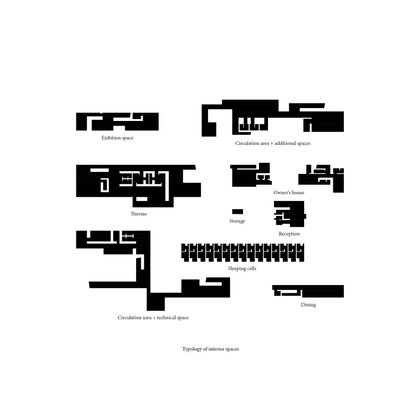 Typology of the interior spaces 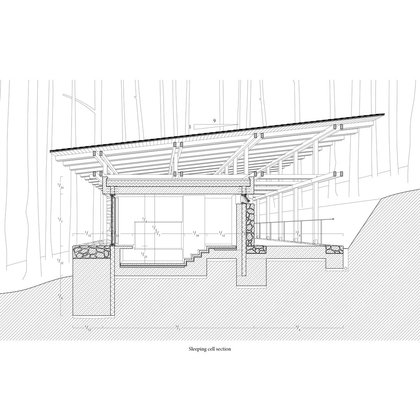 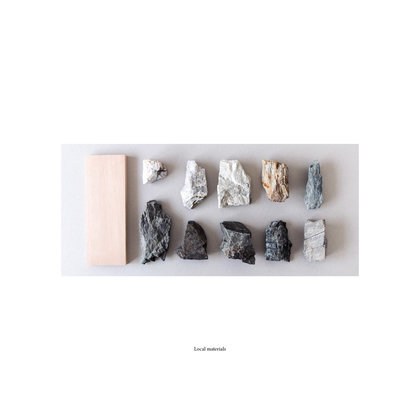 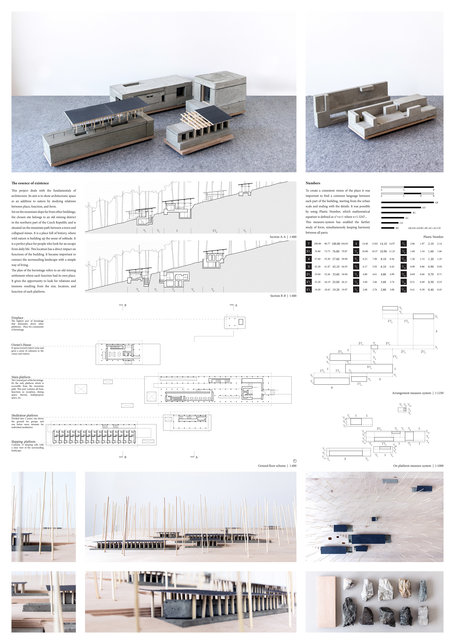 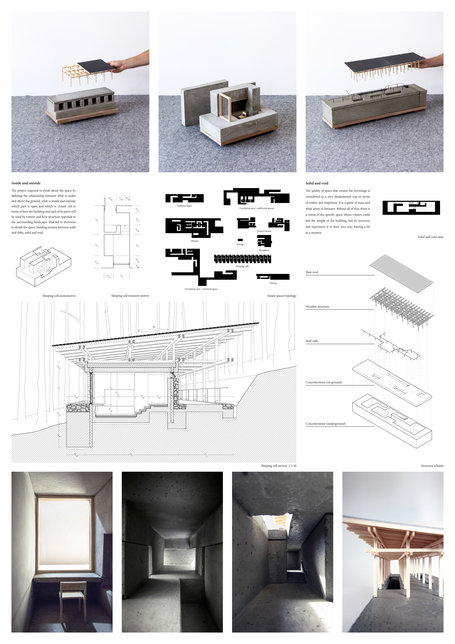