Earth up the territory 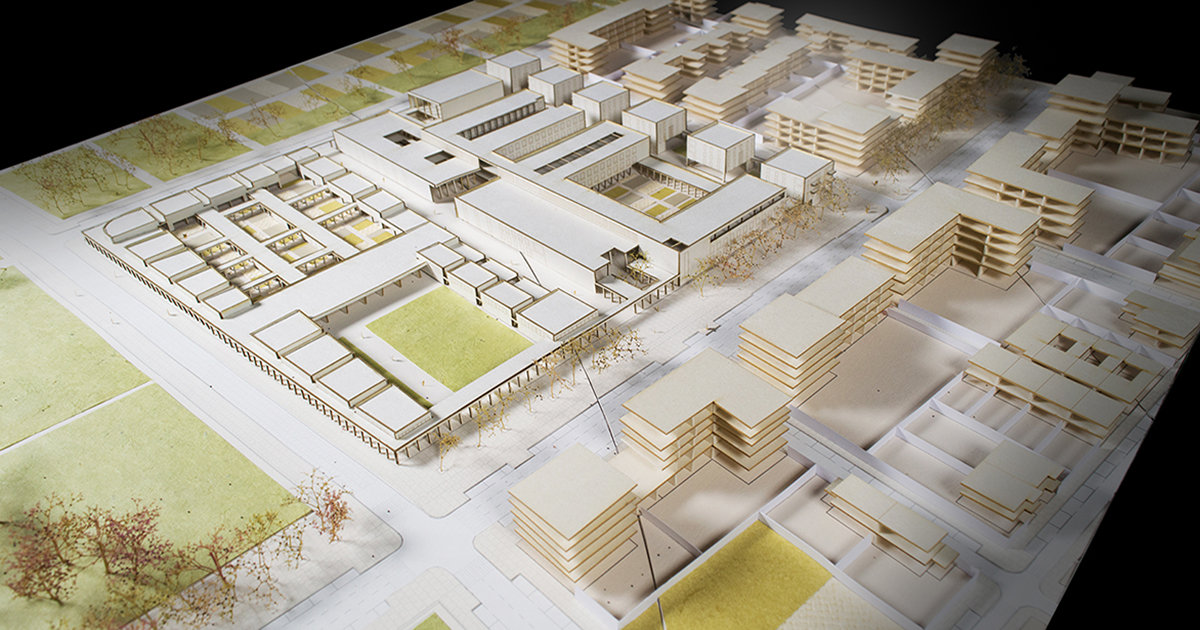 From the urban to the detail scale, the project tries to ensure consistency and rationality, with the idea of creating a specific identity to its territory. Located at the South of Paris-Orly airport, the plains of Wissous are a typical example of declining suburban agricultural lands, surrounded by an unplanned development that gains on the residual farming.

How should we address this land pressure and meanwhile preserve the structure and purpose of the site? This project tries to solve this question by making urban farming the central focus of these new neighbourhoods, allowing not only a sustainable use of the land, but also a tool to regulate density, and creating a territorial attractiveness. These urban farming lands can be seen as a new kind of park that mixes cultivation, leisure and pedagogy.

This park needed its own embassy, an institution able to shine and gather all kind of citizens around this question of local food production. Composition was the key to lay out the square formed of four urban blocks joined together. An external gallery enables to unify such a various program, and creates an urban promenade linked to the cultivated lands. Inside, parallelepidedal blocs are organised to created several intimate outdoor spaces, from the courtyard to the patio, revisiting traditional references.

Finally, this institution, broadcasting earth, exposes it with its own walls, and its architecture plays with the opposition between urban and rural environments.

This work is a remarkable example of a global and multi-scale approach.

The project began by a detailed analysis of the urban context, overwhelmed by the presence of Orly airport and its nuisances, the survival of residual agricultural activities, some uncoordinated housing developments, and larges infrastructures. On this basis, a master plan for a vast area of 5 x 2 km was produced, inserting large transversal stripes of preserved agricultural territories and determining blocks of future urban dense developments, hierarchically organized by the road system and public spaces.

Finally, strongly linked to this entire and large-scale project’s approach, the program the students contributed to elaborate combines diverse needs and aims. It includes a school with its boarding, a research centre, a museum including workshops, a greengrocer associated to a market gardening with fields for crops, vegetables and breeding. How to organize these multiple functions program into the unifying urban form delimited by the large-scale scheme? How to express the central role of this institution for the neighbourhood and link it to the strips of countryside which are preserved? How a building project could solve and synthesise all the difficulties of such a complex situation?

This project won the congratulations of the jury for the amplitude of the questions raised, the coherence of the approach and the rigor of their resolution, as much at the urban level as at the architectural stage. 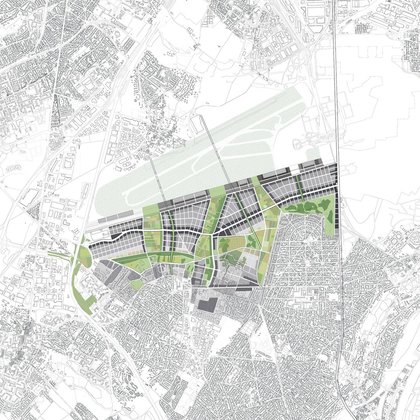 Strategy for density : from the urban boulevard to the outskirts of the park 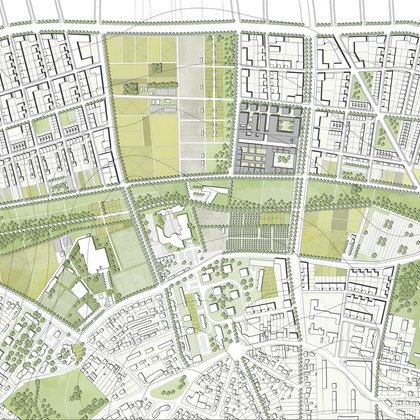 Urban plan : an institution as an embassy of the park, articulating urbanisation and farms 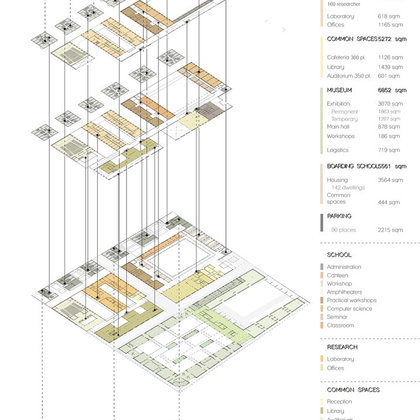 Programme of the institution 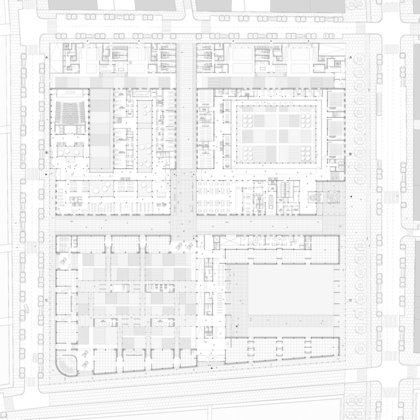 Ground floor plan of the campus : composition as a tool to unify all the programs and actors 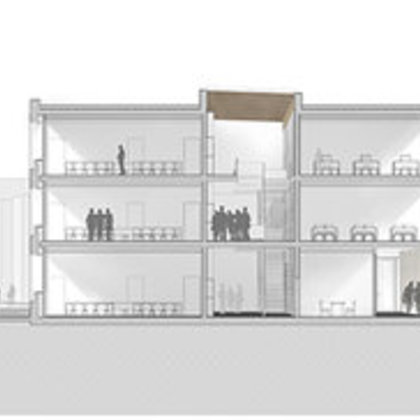 Research center and school : A serie of interior spaces dedicated to experimental farming 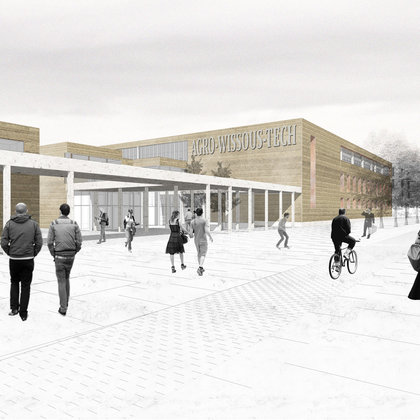 Main entrance of the school (East entrance) : The gallery, uniting the whole project 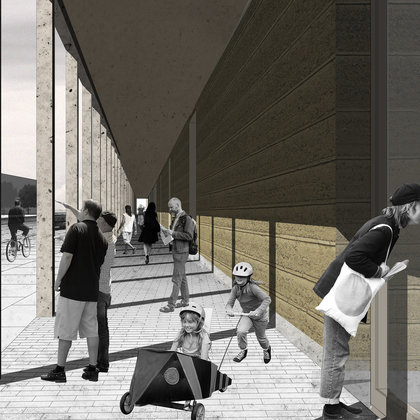 The south gallery of the museum : A covered promenade 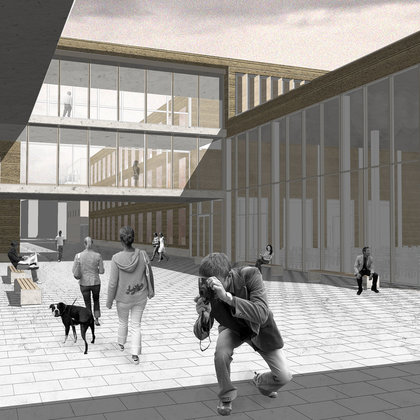 Central view of the institution : The articulation of the campus 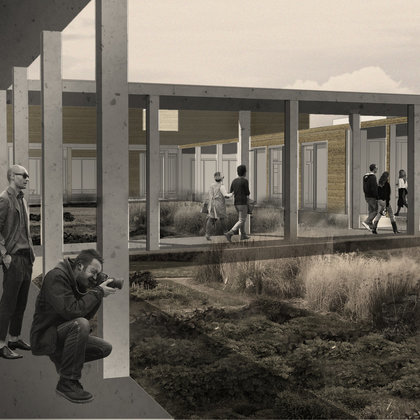 The museum - Exterior spaces : Architectural vision dedicated to the exposure of the nature 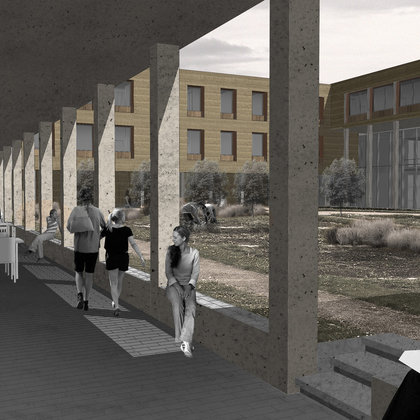 The school patio : A meeting place 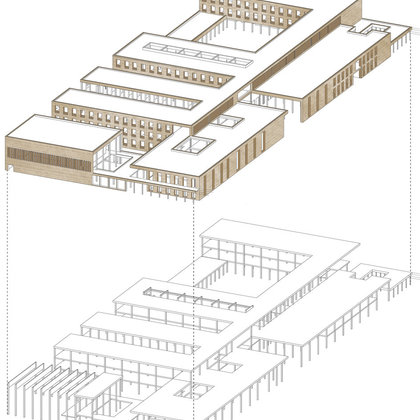 A concrete column/slab frame with a rammed earth envelop 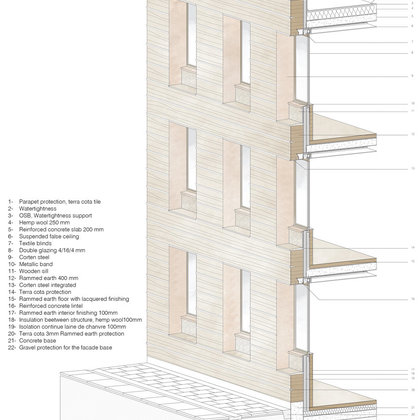 Detail of the school wall made of rammed earth 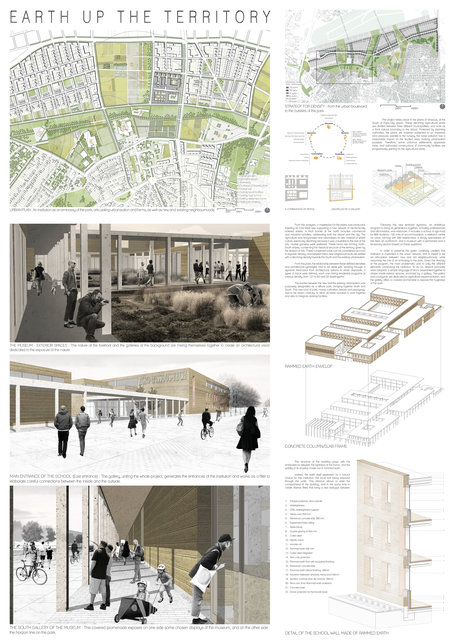 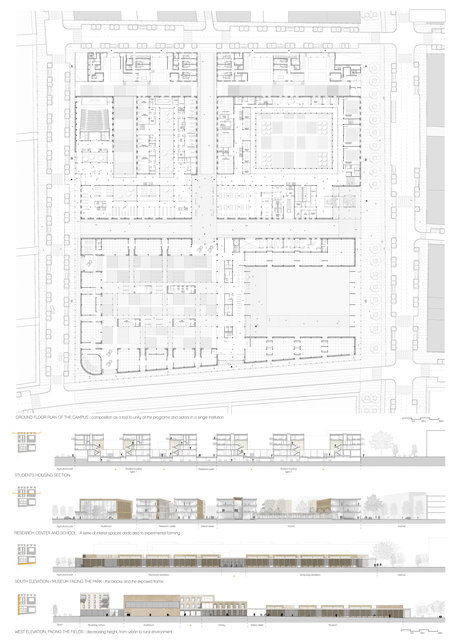