by Danai Toursoglou from Aristotle University of Thessaloniki, School of Architecture, Greece
Tutored by: Voyatzaki Maria 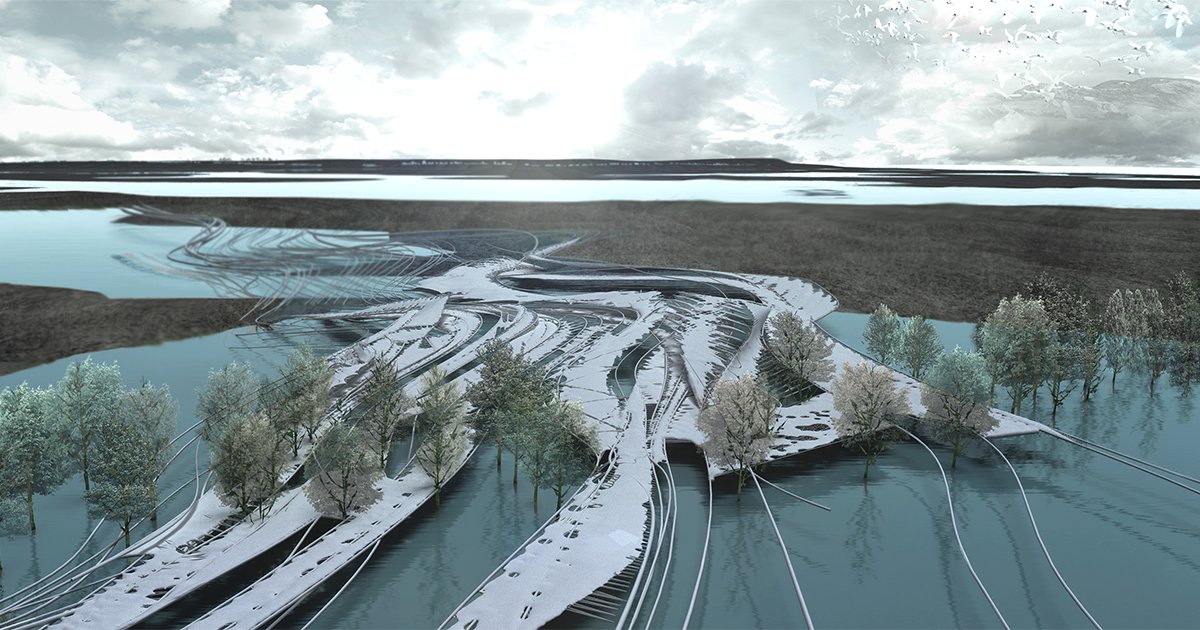 This project is questioning the role of the architect in a technologically-mediated world. In the base of conceiving the world as unsegmented, is researching the impact of this state of things on the population flows. This project conceives the architectural discipline as a way of augmenting human activity, nature and existing territories.

The area between the city of Orestiada and river Evros is chosen as a site. River Evros is perceived as a line that either separates or connects Greece and Turkey. Therefore the natural phenomenon of flood is examined, as a trigger of notional and physical transformation.

The project is based on a research on the territory, that follows the fibres along which multiple kind of transformation is evoked, on a local and global level.

The existing territory is informed by the materiality of the river, its mycelium growth. An augmented natural ephemeral material, that the transformation between its phases depends on the presence of water. The technological system, receives data about the change of the water level and informs, together with time, the construction.

As a result, a spatiotemporal continuum is revealed. Not away from a physical phenomenon, but in a sympathy with that. A constant deterritorialisation is achieved, depending on the human-nature-technology interaction. An assemblage is emerging between the artificial and the natural, the animate and the inanimate, in order to function as a territory that supports any human activity.

The project is questioning the role of the architect in the contemporary, technologically-mediated world, through a deeply sensitive perspective on society and nature. The project premises lie in the contemporary reality of dissolving the artificial polarities between the human and the non-human, the natural and the artificial, the indigenous and the foreign, the stabilised and the nomadic.

Starting from the population flows, this thesis suggests that living in sympathy with human activity, and all the transformations that are evoked in natural and artificial elements, a new form of ever-changing territory could arise. River Evros, which could be taken to either separate or join Greece and Turkey, is smartly chosen, as a natural ever-changing element perceived as a limit. Flood is studied up-close as the generator of notional and tactile connections. It is challenging the role of architecture, as a mediator between matter and fact; as a discipline capable of orchestrating the emergence of new ecologies, being it social and/or environmental.

The notional and physical connection with two ends in the current state of affairs, the immigration flow, and the alienation of the locals away from a natural but tabooed element is responded innovatively. Experimenting with the local materiality of the river, its mycelium growth and programmed drowns the artificial barrier of the here and there can be potentially bridged, prompting thereafter other alternatives to the geopolitical issue. 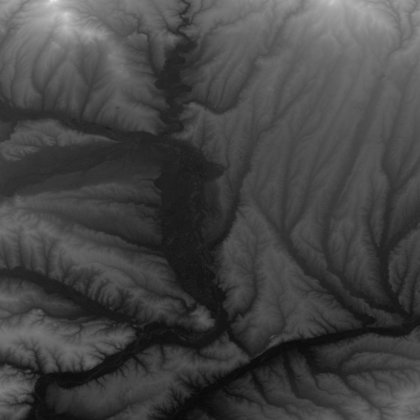 The area between the city of Orestiada and river Evros is chosen as a site. 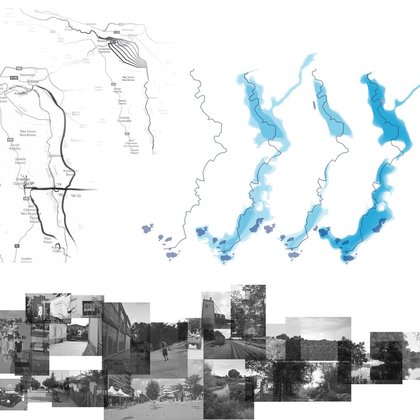 Research on the territory along the fibres where multiple kind of transformation is evoked. 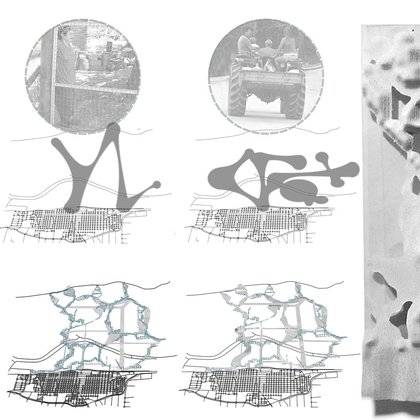 Force fields created in between the main routes of the users and the grid to create a new territory. 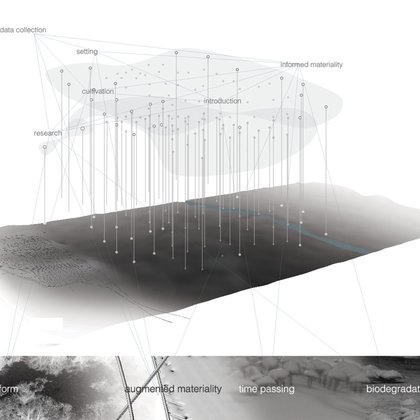 The constant spatiotemporal transformation is expressed by using Mycelium roots. 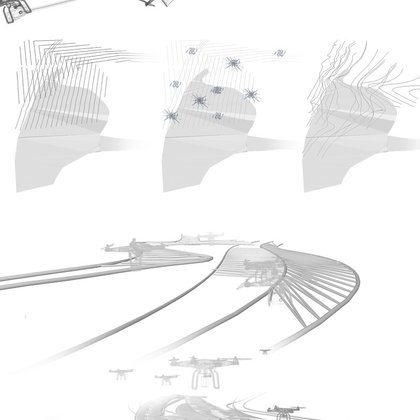 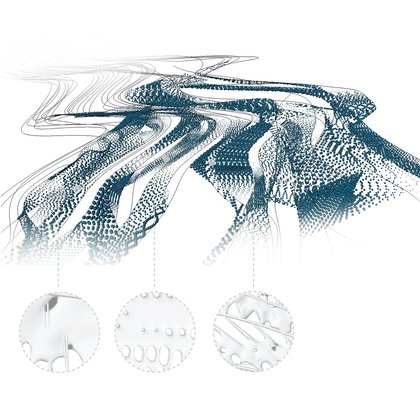 Indicative ways of inhabiting the structure are pointed and fluid material is located on the frame. 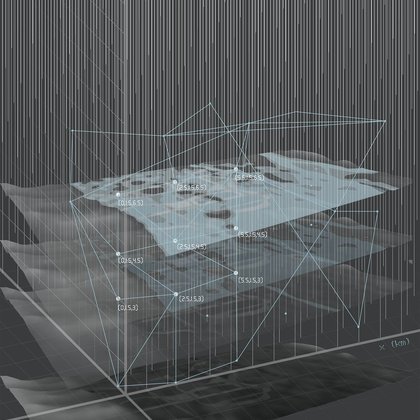 Space is revealed as a sequence of frames where the continuity is formed perceptively. 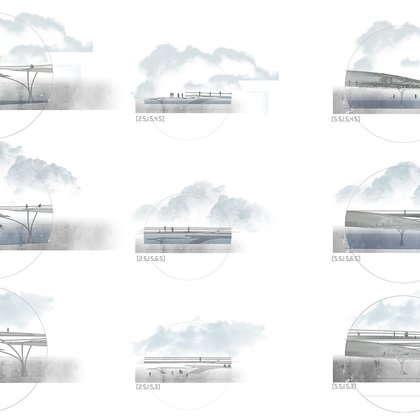 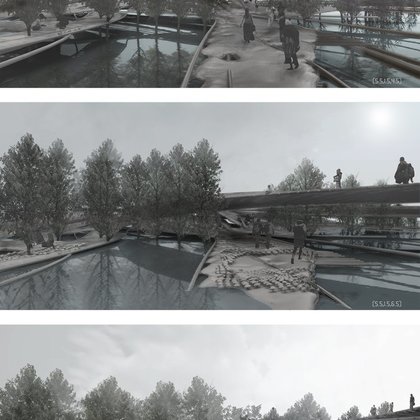 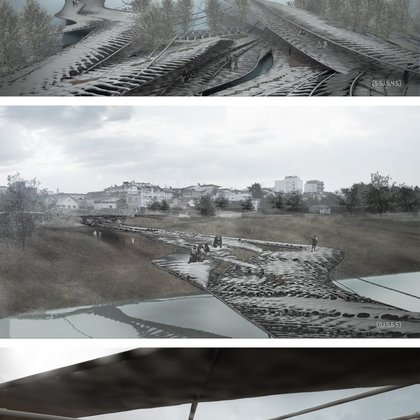 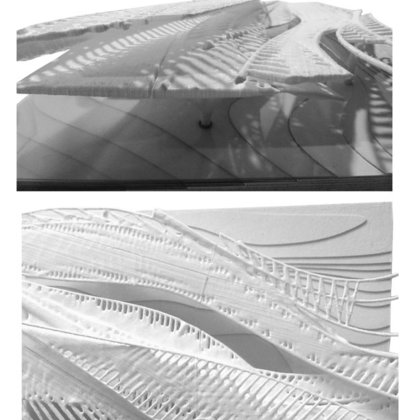 Model of a frame. 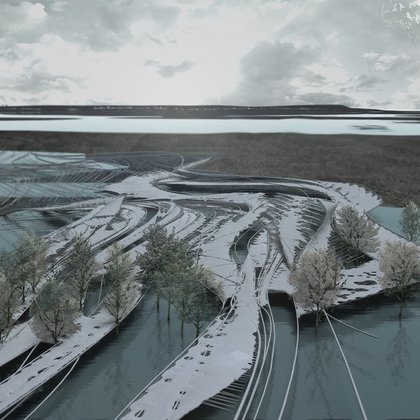 Bird’s eye view of a frame. 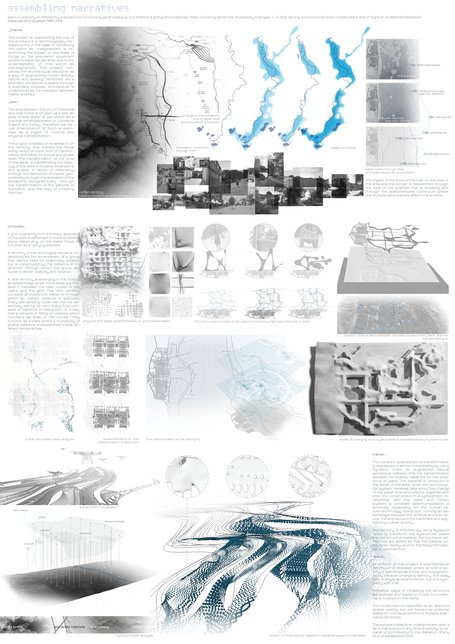 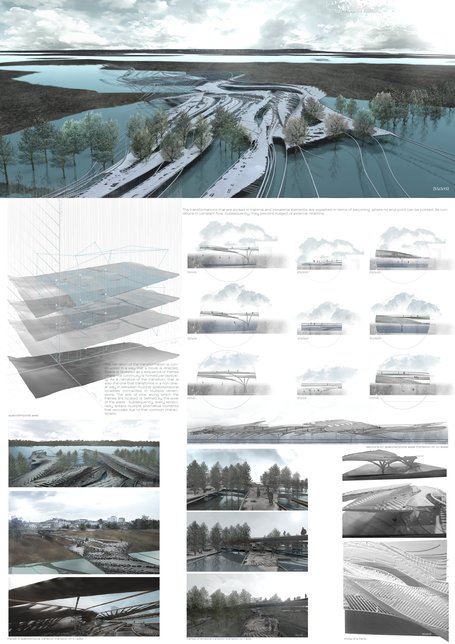