Rethinking Democracy in God's Own Country

by Matthew Bloomfield from University of Sheffield, School of Architecture, United Kingdom
Tutored by: Carolyn Butterworth 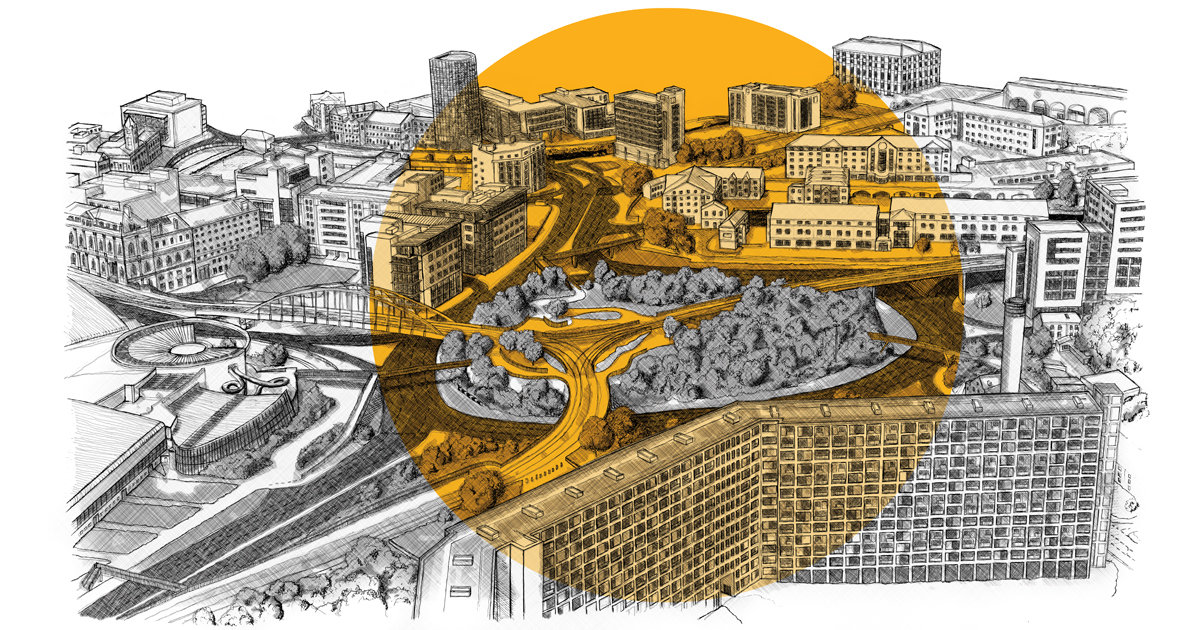 Speculating upon current political trends within the UK and internationally, the project imagines the prospect of Yorkshire’s Independence from the UK and therefore proposes a Parliamentary Campus for the Independent Nation State of God’s Own Country. The project narrative charts the rise of a demagogic Everyman and his ultimate fall from grace as a vehicle to address localism and identity, protectionism, democratic accountability and inclusive liberalism.

Situated within the city of Sheffield, the Campus houses political and governmental functions set alongside leisure facilities and essential services. The provision of this range of typologies in one place unifies different spheres of life, creating an ideal civic model and delivering a more accountable, more engaged politics.

The thesis draws heavily on Harry Frankfurt’s “On Bullshit” and intends to act as a critique of contemporary political discourse, which tends towards soundbites and empty rhetoric. This is taken as parallel to our contemporary commodified architecture which lacks critical value or meaningful nuance. Railing against this tendency of architectural reductionism, the Parliamentary Campus of God’s Own Country displays a considered specificity of cultural, physical and historical context. This variety of influences results in a pluralistic proposal which accommodates different forms and scales of democratic action.

We were hugely impressed by the ambition, complexity and design flair of “Rethinking Democracy in God’s Own Country”. This was a project that aimed high from the very start, integrating a challenging site and a complex programme while exploring a controversial topic in the UK (and across Europe) – that of regional independence.

While other students might have floundered under the weight of such challenges, this work thrived as new forms of production and representation were tested to develop a distinct architectural language that evolved directly from design research.

Founded on extensive exploration of parliamentary governance and contemporary media discourse, an engaging narrative was developed which held a critical lens up to themes of populism, local identity and citizen participation. This provided a rich creative context for the development of a highly individual design project.

Using humour, a good knowledge of the parliament typology and constant creative production, a unique architectural language evolved that blended regional vernacular, monumentality, civic gestures and good honest Yorkshire sense. Constant references to academic, architectural and popular sources are testament to the rigour with which the design was resolved. The result is a project that is absolutely anchored in its site and in its region, and yet speaks to many places and regions as they strive for identity and recognition. 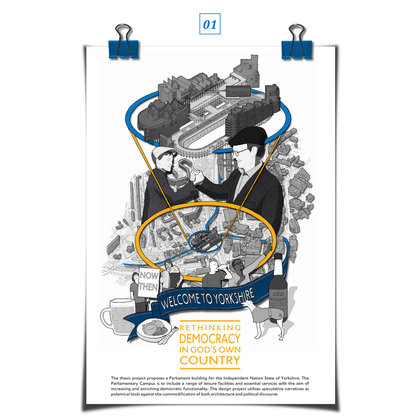 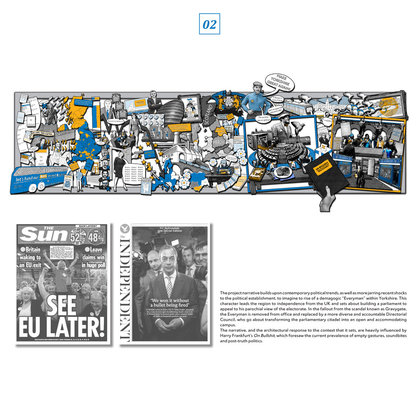 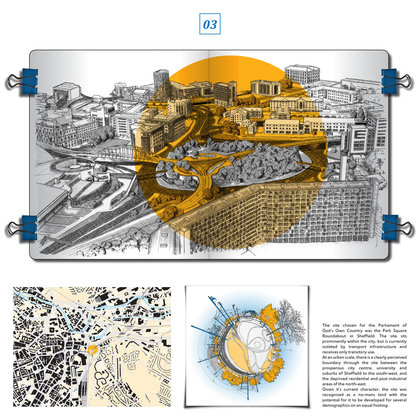 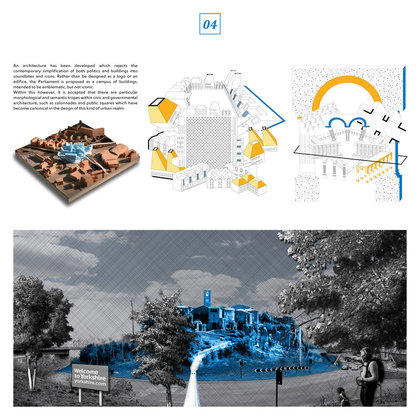 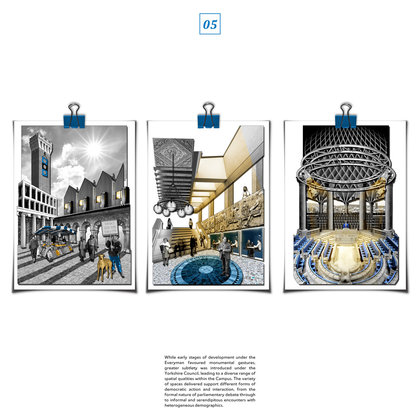 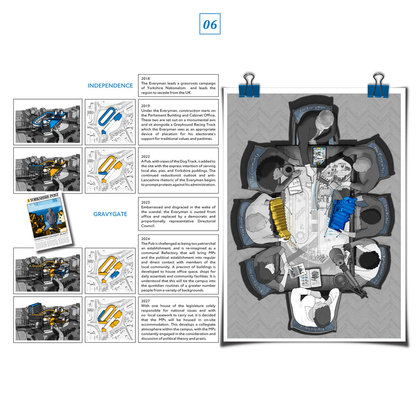 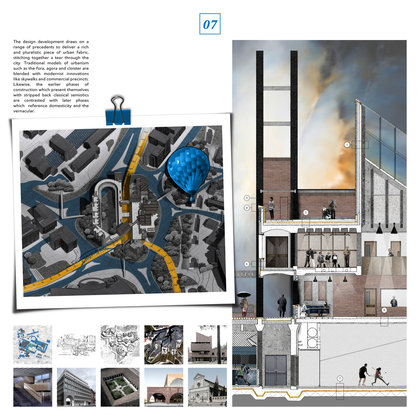 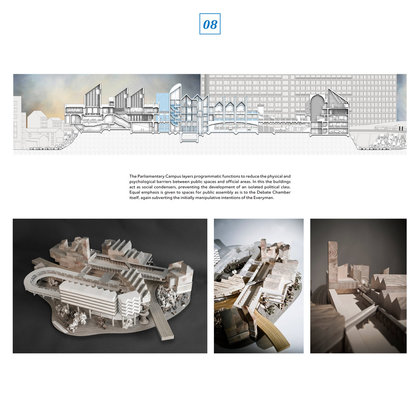 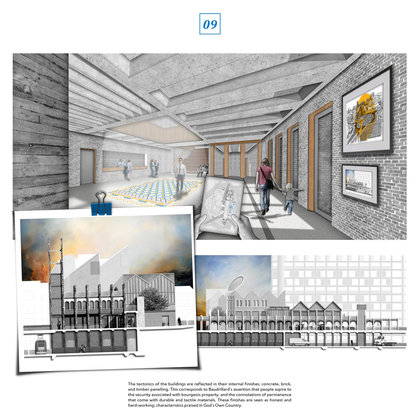 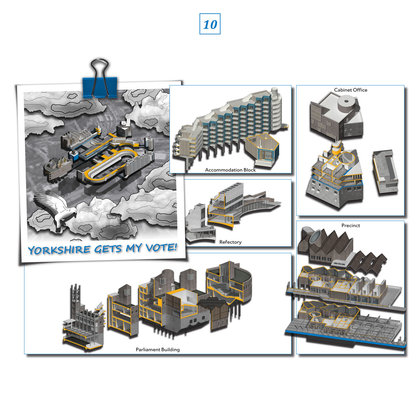 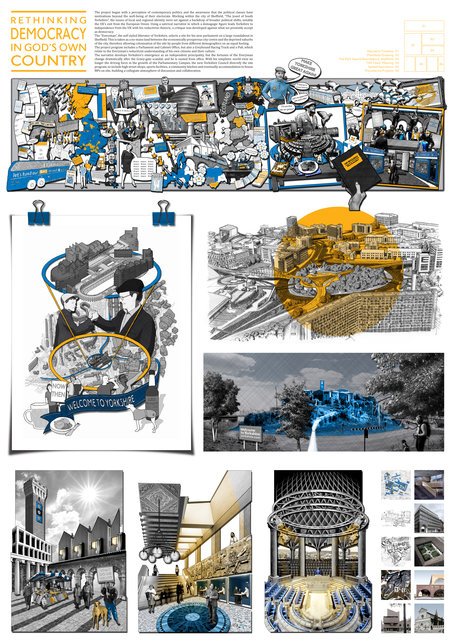 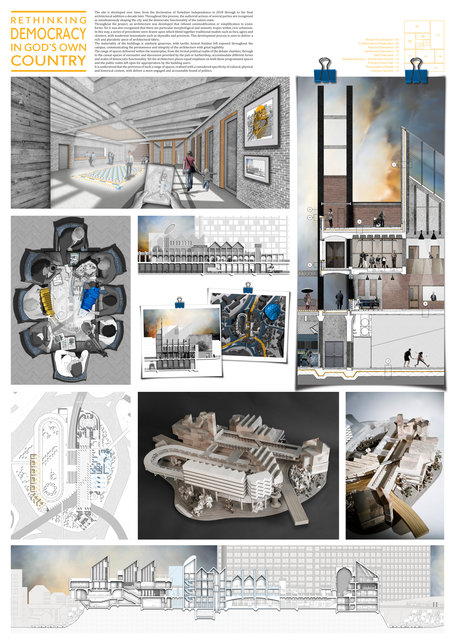