Su(per)misura. Shopping mall as a challenge in the reuse of Bigness: the case study of “Palazzo del Lavoro” in Turin 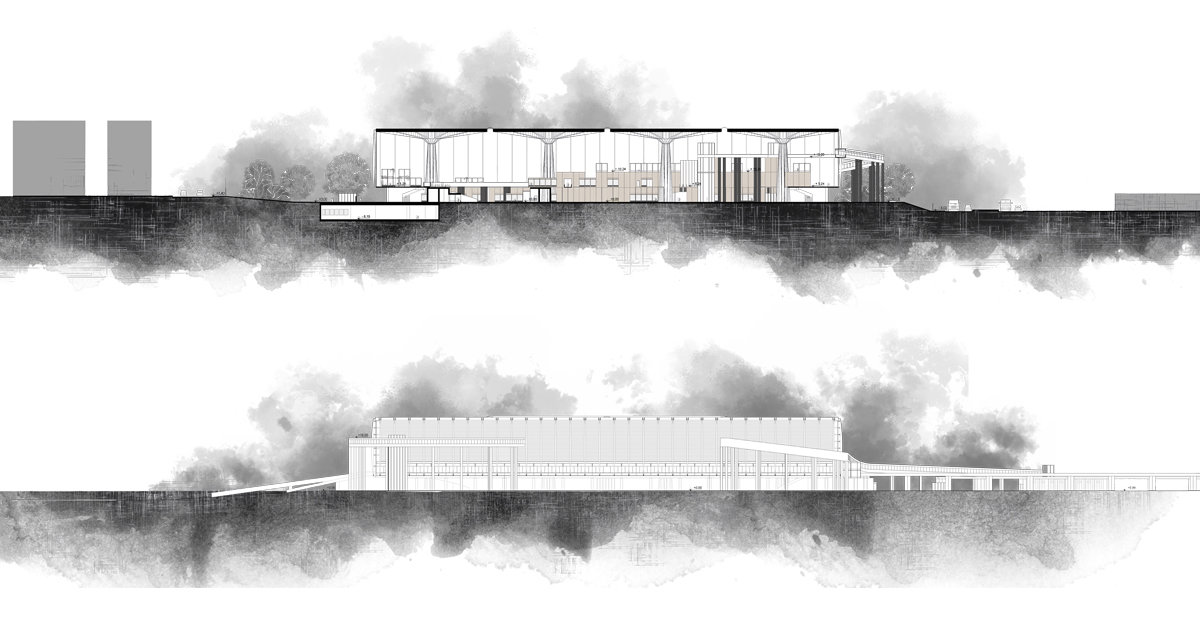 "Su(per)misura" is a work involving both research and design, facing the Bigness of a building which has been abandoned for a long time: the “Palazzo del Lavoro”, by Pier Luigi Nervi, built in Turin in 1961 on the occasion of the centennial of Italian unification. The challenge proposed by this thesis consists in taking into consideration an architectural typology apparently inadequate for the re-use of this historic building, the “shopping mall” type. Its potentials are analysed in order to find some analogies with the current needs of our case study. The result is a multifunctional project, considering multiple aspects, above all the re-appropriation of this place claimed by both the local citizens and the vegetation surrounding the building, trough  a global “ecological” view. We look at architecture as a product of man and, subsequently, of nature: starting from this vision, we define a new design method, characterized by a “parasitic” diffusion of volumes inside the Palazzo. The distribution of these elements, inspired by the setting of the surrounding urban blocks, appears as a continuation of the city’s structure inside the building. It develops itself also trough the increasing of the already copious “invasion” of plants and vines coming from the outside. This solution attempts not only to preserve our historical heritage, but also to give it back to people who claimed it for years, giving them the possibility to take care of it and making it alive for a second time.

This work concerns the famous Pier Luigi Nervi’s “Palazzo del Lavoro” in Torino, an amazing work but also extraordinarily difficult to reuse. It is now abandoned and the nature gradually took possession of it. The city decided to insert a mall in it. Students worked on several topics: the current trends in the large shopping centers (which in Italy often have a very low and standardized architectural quality); the urban side (from the point of view of traffic, services, connections, other commercial activities and other malls); the citizens opinions (it was very important, because often students do not realistically consider end users); the “great dimension”. Their proposal aimed at a high quality mall, flexible and able to exploit our typical productive traits, as well as to meet the citizens’ requests. The constraints were many and complex: students were able to stay in balance among them, with a compelling project. The extraordinary interior space perception has been safeguarded, moreover including a museum itinerary to offer so far not possible visuals; the presence of nature, which in recent years had expanded in the Palace, was emphasized in a dialectic city/nature; the crossing routes between them were carefully studied and also the cycle path crosses at altitude the Palace, emphasizing the size of this interior space that looks like an outdoor one. We can hardly find in a master thesis this ability to manage issues so different and at different scales. 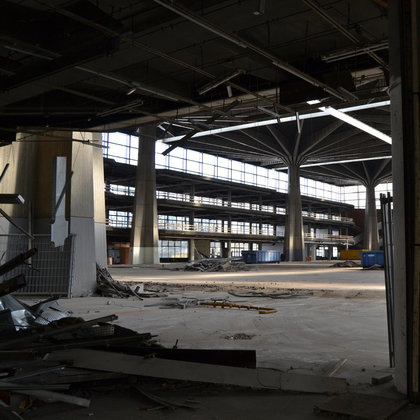 The current situation of decay of Palazzo del Lavoro 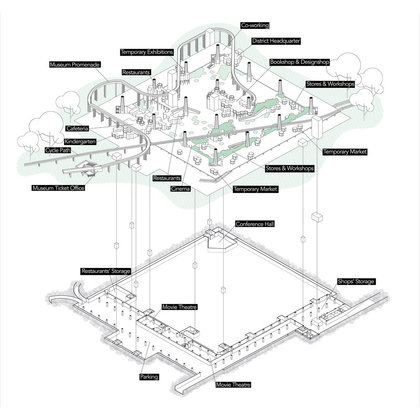 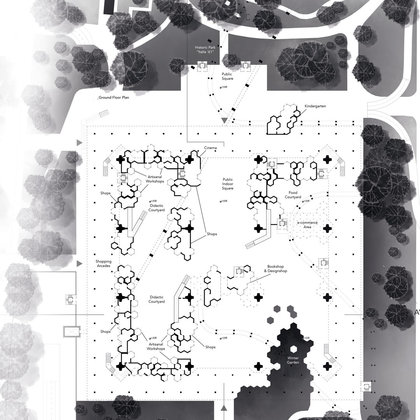 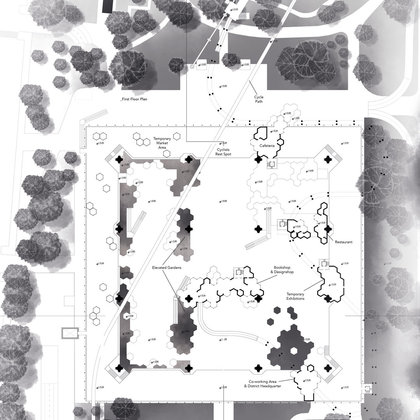 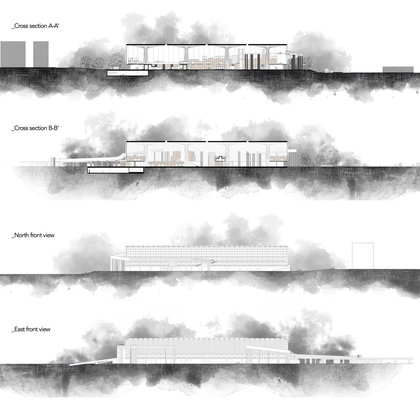 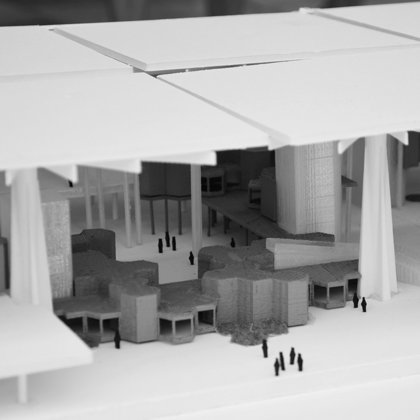 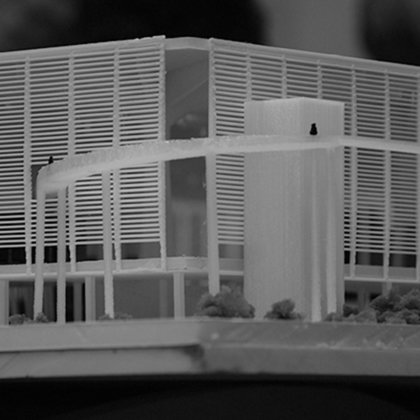 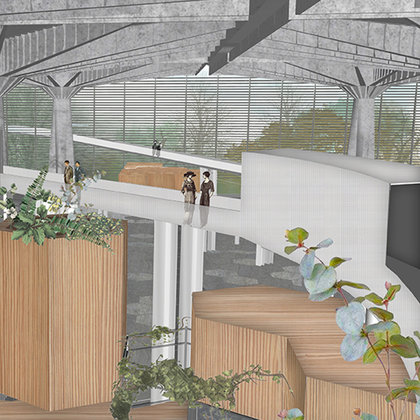 View on the elevated boardwalk of the museum 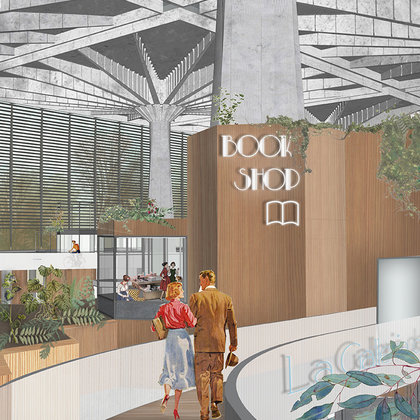 The access to the bookshop from the elevated promenade 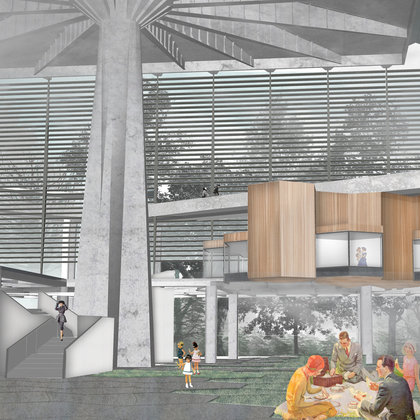 View of the winter garden and indoor picnic area 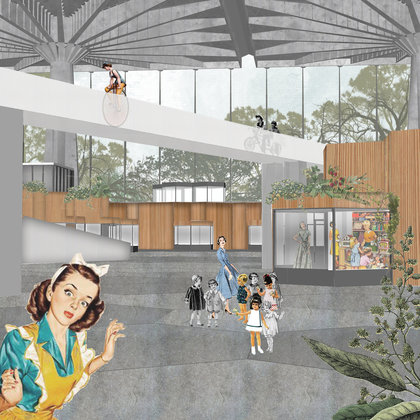 View of a didactic courtyard with artisanal workshops, created for the students of the neighborhood 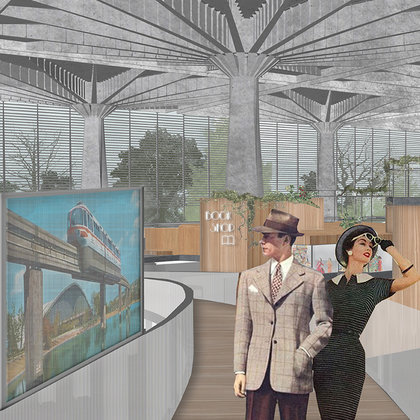 The museum promenade, with an exhibition regarding the history of the building 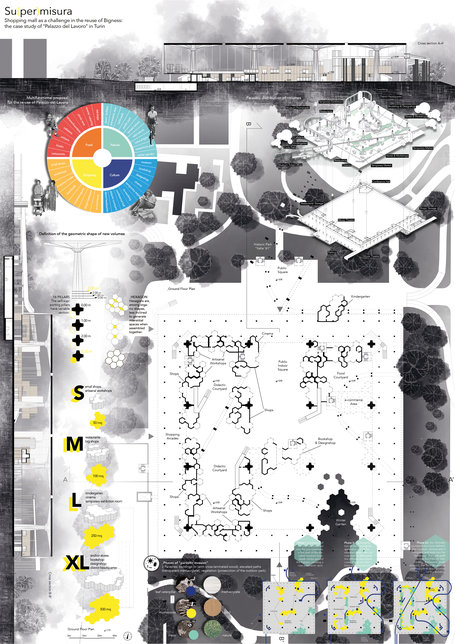 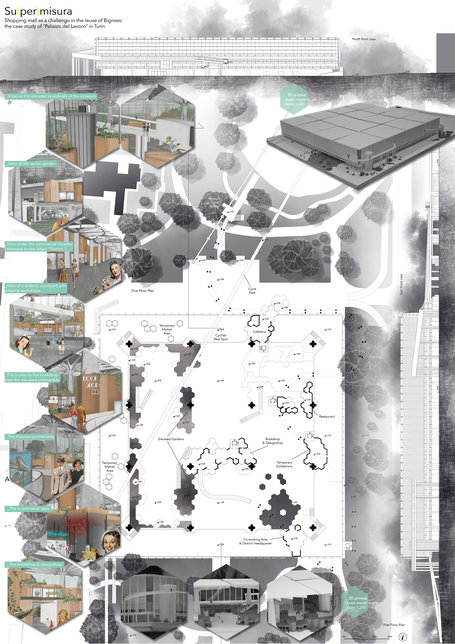